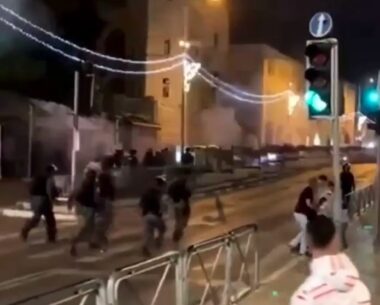 Eyewitnesses said the soldiers fired many concussion grenades and gas bombs, in addition to spraying them with wastewater mixed with chemicals.

The soldiers also chased and assaulted many young men near Al-Aqsa, and in the alleys of the Old City.

They added that the soldiers and police officers attacked the Palestinians to force them to leave the areas surrounding Al-Aqsa, and attempted to abduct some of them.

In addition, several illegal Israeli colonialist settlers attacked young Palestinian men near the Hebron Gate, in Jerusalem, injuring some of them.

It is worth mentioning that the Israeli escalation started on the first day of the holy Muslim month of Ramadan, leading to dozens of injuries in addition to numerous arrests and detentions.