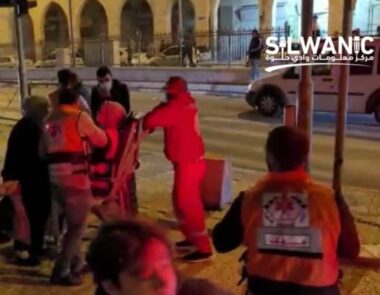 Israeli soldiers injured, on Friday evening, many Palestinians and abducted many others, in several parts of occupied Jerusalem.

The Wadi Hilweh Information Center in Silwan (Silwanic) said dozens of soldiers, police officers, and mounted units were deployed in the Old City, especially around the Al-Aqsa Mosque, in addition to many other areas such as Bab al-Amoud, al-Misrara, Nablus Str. Sultan Suleiman Str, and Bab as-Sahera.

It added that the army, and the police, assaulted dozens of Palestinians who were walking and sitting in the area during the evening hours, to force them to leave, and fired gas bombs, concussion grenades in addition to rubber-coated steel bullets.

Medics of the Palestinian Red Crescent society (PRCS) provided treatment to six Palestinians who were shot in the Old City and described the injury of four of them as moderate. All were moved to a local hospital.

In addition, many Palestinians suffered cuts and bruises due to Israeli concussion grenades, and dozens suffered the effects of tear gas inhalation, while many others sustained fractures after being assaulted by the soldiers and the police.

The soldiers also abducted many young Palestinian men, and a few children, before taking them to nearby police stations and detention centers.

Late on Thursday at night and on Friday at dawn, the soldiers abducted eight young Palestinian men, and assaulted dozens of worshipers, after the army and the police stormed the courtyards of the Al-Aqsa Mosque compound, and its al-Qibli Mosque, to remove the worshipers.

On Thursday, and for the third day in a row, the Israeli soldiers and police officers continued to attack Muslim worshipers while entering or leaving the Al-Aqsa Mosque and assaulted many following evening prayers.