Army Carries Out A Limited Invasion Into Northern Gaza 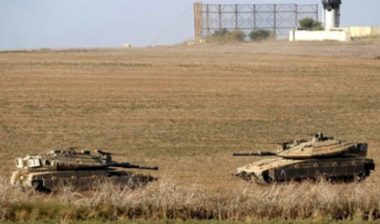 Several armored Israeli military vehicles carried out, on Wednesday morning, a limited invasion into Palestinian lands, east of Jabalia, in the northern part of the Gaza Strip.

They added that several Israeli military drones hovered over the area, and other parts close to the perimeter fence, across the coastal region.

Last night, the soldiers attacked dozens of protesters in the Gaza Strip, and injured many Palestinians.

On Tuesday evening, the soldiers shot five Palestinians, including one who was seriously injured, east of Khuza’a town, east of Khan Younis, in the southern part of the Gaza Strip, and near Jabalia, in northern Gaza.