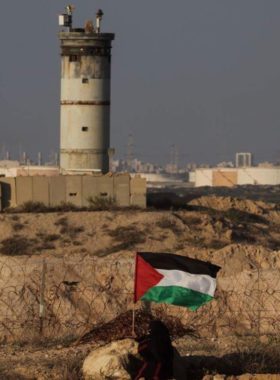 Israeli soldiers shot, on Tuesday evening, five Palestinians in the Great Return Camp, east of Khuza’a town, east of Khan Younis, in the southern part of the Gaza Strip and near Jabalia, in northern Gaza.

The Palestinian Health Ministry in Gaza has reported that two Palestinians were injured, including one who suffered a very serious gunshot wound to the head in northern Gaza, and were rushed to the Indonesian hospital, east of Jabalia.

Dr. Ashraf al-Qedra, the spokesperson of the Health Ministry in Gaza, said the Palestinian, who was shot in the head, was later rushed to the Shifa Medical Center, due to the seriousness of his condition.

It added that the soldiers shot two Palestinians near Khuza’a town, east of Khan Younis, and one who was shot with a gas bomb in his head, east of Gaza city.

Protests were held along the eastern border areas along the Gaza Strip, including Khan Younis, al-Boreij in central Gaza, and Jabalia, in northern Gaza.

Furthermore, the Israeli Navy fired many live rounds at Palestinian fishing boats, near the shore of Gaza city, causing no damage or injuries.

Israel also is threatening to reduce the fishing zone from six nautical miles to three, if the protests continue.