King Abdullah: “All UN And Security Council Resolutions Must Be Implemented” 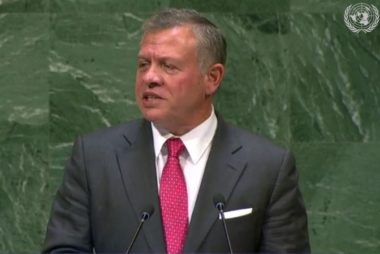 During his speech from the podium of the General Assembly of the United Nations, in New York, King Abdullah of Jordan, said that only the two-state solution, and the full implementation of all resolutions issued by the United Nations and the Security Council, can resolve the current conflict, and bring peace to Israel and Palestine.

King Abdullah stressed on the importance of establishing a viable, sovereign and independent Palestinian State, with east Jerusalem as its capital, living in peace next to Israel and the rest of the world.

He added that all resolutions, adopted by the United Nations and its Security Council since the beginning of the conflict, fully recognize the legitimate Palestinian rights of independence and liberty, to live in peace and dignity.

“This is the core of the two-state solution,” he said, “This is the only way to achieve a lasting, comprehensive peace.”

He also stated that all Arab and Islamic States are committed to a comprehensive peace, and the Arab Peace Initiative, which was submitted more than 16 years ago, offering peace and normalization with Israel in return for its complete withdrawal from the occupied Palestinian territories, including East Jerusalem.

King Abdullah added that various countries around the world, the United Nations and the European Union, have been working to achieve real peace and security.

“We cannot just surrender because the mission is hard. Otherwise, what are the alternatives we will all face? We cannot keep one of the most important, strategic, regions in the entire word hostage for endless violence,” he said, “Jerusalem, a holy city to more than half of the people of this world, cannot continue to face these constant threats that target its heritage, history and its identity based on respect to all religions.”

“What is the future that we will face based on what some are suggesting? A bi-national state based on denying equality among its citizens? This is the ugly and undemocratic truth about the one-state solution, which is not, in any way, an alternative to peace based on the two-state solution.” King Abdullah added, “It is just another way to avoid working towards a peaceful settlement, based on equal rights for all.”

King Abdullah also said that world countries must work together to restart the peace process on the correct track, away from threats, illegal activities, the confiscation of lands, or threats targeting the daily livelihood and security of innocent civilians, especially the children.

He also called for supporting and financing the United Nations Relief and Works Agency (UNRWA), and all organizations that support the poor families and the stability of societies.

Further, the Jordanian King stressed on the importance of protecting and preserving the heritage of Jerusalem, a city holy to billions around the world, and added that any attempt to alter and void the historic, Arab, Islamic and Christian history of the city, must be encountered and foiled.

In related news, Nabil Abu Rodeina, the spokesperson of the Palestinian President Mahmoud Abbas, strongly denounced Trump’s speech at the opening session of the United Nations General Assembly, and said the Trump is only deepening conflict, and obstructing the chances of achieving real peace.
Abu Rodeina said that Jerusalem is and will remain the capital of Palestine in the 1967 borders, regardless of who accepts or rejects this fact.

Dr. Hanan Ashrawi, a member of the Executive Committee of the Palestine Liberation Organization (PLO), said in a tweet that the speech of the U.S. President is “plain bullying.”

“Trump at the UN: superficial defense of unilateralism, isolationism & plain bullying,” she wrote, “He launched an arrogant attack on the global system from its podium, boasted of illegally moving embassy to Jerusalem & leaving HR Council! Condescending ignorance: double flaws.”