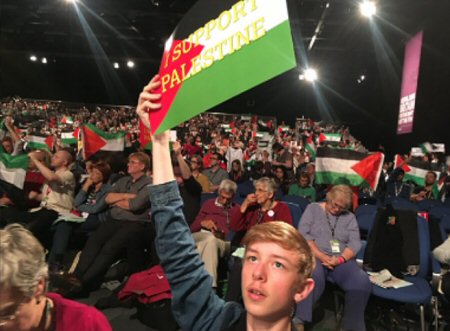 Delegates at the Labour Party conference in Liverpool have voted to support a freeze on arms sales to Israel, after debating a motion on Palestine, for the first time in living memory.

During the motionm the conference floor became a sea of flags as delegates showed their support for Palestinians.

The unprecedented motion noted that that ‚Äúthe majority of Palestinian people were forcibly displaced from their homes‚ÄĚ during the Nakba and condemned the ‚Äúaggressive attempt to rewrite history and erase the victims of the 1948 war‚ÄĚ.

It called for an ‚Äúindependent international investigation into Israel‚Äôs use of force against Palestinian demonstrators‚ÄĚ, an ‚Äúimmediate and unconditional end to the illegal blockade and closure of Gaza‚ÄĚ and ‚Äúa freeze of UK Government arms sales to Israel‚ÄĚ.

Israel has killed over 170 Palestinians in Gaza since weekly ‚ÄėGreat March of Return‚Äô demonstrations began on 30 March.

The motion noted that, amongst those killed during the Palestinian protests of recent months, are paramedics, journalists, women and children, while than half of the injured were hit with live fire by snipers as they approached the border with Israel.

According to the PNN, Palestine Solidarity Campaign (PSC) Chair Hugh Lanning said: ‚ÄúWe have witnessed extraordinary scenes of solidarity today and the Labour Party has done the right thing by recognising the longstanding injustice of Israel‚Äôs violation of Palestinian rights.

This is an important step forward in building solidarity with Palestinians within Labour and we hope the leadership will listen to the will of the party on this issue.‚ÄĚ

PSC handed out more than a thousand Palestinian flags at conference on Tuesday morning. In remarkable scenes, many hundreds of delegates stood and waved their flags inside the conference hall when the motion was debated and chants of ‚ÄúFree Palestine!‚ÄĚ were clearly heard.

PSC director Ben Jamal said: ‚ÄúThis incredible show of support and this historic motion demonstrate the strength of feeling at the grassroots of the party.¬† Labour members want to show real solidarity with Palestinians.

“Given Israel‚Äôs continuing use of live fire to kill unarmed Palestinian demonstrators, it is no surprise that there‚Äôs clear support for an immediate freeze of arms sales to Israel.‚ÄĚ

The motion ‚Äď moved by Harlow Constituency Labour Party (CLP) and seconded by Wolverhampton South West CLP ‚Äď is the first to be heard at conference on Palestine in many years.

Palestine was put forward as the fourth most important issue by CLPs in the priorities ballot, after housing, the schools‚Äô system and ‚Äújustice for the Windrush generation‚ÄĚ and above Brexit, the NHS, climate change and social care.