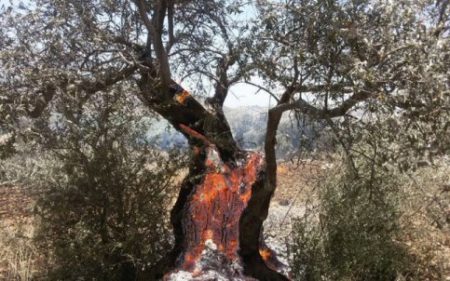 An Israeli settlement guard, Wednesday, set fire to Palestinian-owned agricultural land planted with olive trees in the town of al-Lubban al-Sharqiya, to the south of Nablus, in the northern occupied West Bank, said a local official.

The village mayor Samer Awais said, according to WAFA, that a security guard from the settlement of Eli, built illegally on Palestinian land, set ablaze four dunams of agricultural land located at the entrance of the town and adjacent to the Ramallah-Nablus road, burning dozens of olive trees.

The town residents and with the help of fire crews were able to put out the fire, he said.