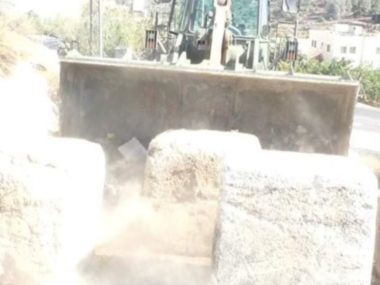 Israeli soldiers closed, Sunday, the main entrance of Beit Ummar town, north of the southern West Bank city of Hebron, with concrete blocks, while military police officers ticketed dozens of drivers on the nearby road.

Media activist, Mohammad Awad, said the soldiers closed the at-Touq Street, near Jerusalem-Hebron Road, with concrete blocks, preventing the Palestinians from leaving the town through its main street, or the Central Market road, just to the east of it.

Awad added that Israeli military police officers stopped and searched cars, before issuing high fines on the drivers, and even pedestrians who were walking in the area and trying to cross.

The Palestinians said the permanent presence of the soldiers in the area, especially around the military tower which stands at the main entrance of the town, is always causing traffic jams, and added that the situation becomes even worse when the soldiers start stopping and searching cars.