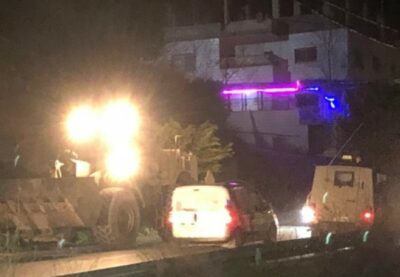 Media sources said the soldiers closed the main road between Burqa and Silat ath-Thaher towns (the Jenin-Nablus Road) and forced the Palestinians to leave the area.

They added that the closed road is near the evacuated Homesh colony, and the soldiers closed it to allow groups of illegal Israeli colonizers to march in the area.

It is worth mentioning that the colonizers constantly invade the area and prevent the Palestinians from entering it as part of the constant attempts to rebuild their illegal colony, which Israel evacuated in 2005.

In related news, the soldiers invaded Abu Dis University, southeast of the occupied capital, Jerusalem, in the West Bank, leading to protests before the army fired gas bombs and concussion grenades.