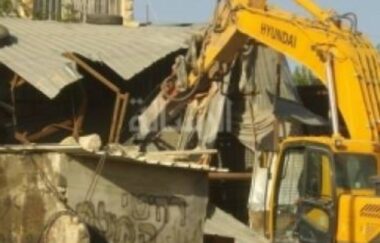 Ahmad Salah, a local nonviolent activist, said several army jeeps and a bulldozer invaded the city before heading towards the car repair facility and demolishing it.

He added that that facility, owned by Hussein Abu Ghalyoon, has been demolished four times before, under the pretext of being built without a permit from the “Civil Administration Office,” the administrative branch of the illegal occupation of Palestine.

The area is also subject to frequent violations, including demolitions and the illegal confiscation of private Palestinian lands for the benefit of the illegal colonies.