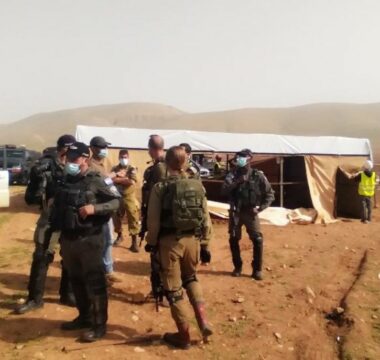 JORDAN VALLEY, Sunday, December 05, 2021 (WAFA) – Today, Israeli occupation authorities ordered several Palestinian families in the northern Jordan Valley region, in the northeast of the occupied West Bank, to leave their homes for 10 days to make way for Israeli military training in the area.

Witnesses told WAFA that the Israeli occupation army handed notices to several families in the village of Ibzeq, located to the east of Tubas town, ordering them to leave their homes as of today and for 10 days to make way for the training.

This means the families will remain outdoors in the extreme winter conditions or aim to find alternative accommodation elsewhere until the end of the Israeli military exercises.

The Jordan Valley forms a third of the occupied West Bank, with 88 percent of its land classified as Area C, under full Israeli military control.

20 percent of the occupied West Bank has been declared “firing zones” since the 1970s, but according to the UN, some 80 percent of these areas are not in fact used for military training.

However, when military training takes place, Israel forces families to leave their homes for hours or days at a time until the drill is over.