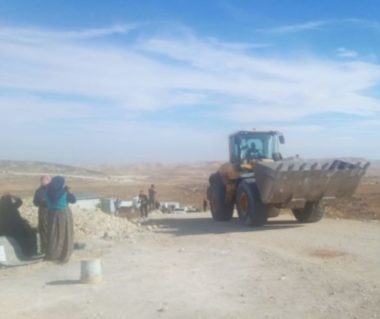 Rateb Jabour, the coordinator of the Popular Committees in southern West Bank, said the soldiers demolished the home, made of bricks and a tin roof, owned by Amer Mohammad Ali Dababsa,

The demolition order was issued less than 72 hours prior to the destruction of the property, which consisted of two rooms.

The destruction left eleven family members, mainly children, homeless in the cold; the family tried to appeal against the demolition order but to no avail.

This marks the second time the soldiers demolish the property, especially after the Civil Administration rejected the structural plan of the village.

The soldiers also handed similar demolition orders to three Palestinians in the area.

The army claimed that the structures were not licensed by the “Civil Administration Office,” the administrative branch of Israel’s illegal occupation of the West Bank.