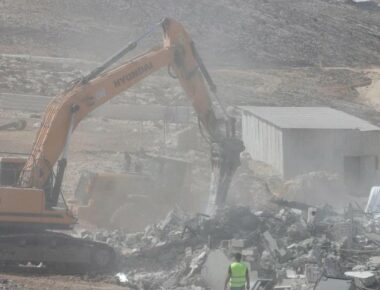 On Thursday, Israeli soldiers demolished a Palestinian home in Doura town, southwest of Hebron, in the southern part of the occupied West Bank.

Media sources said the soldiers invaded the Khallet Taha area in Doura before surrounding the home and forcing the family of eight out.

The demolished property was 120 square meters; the Israeli army claims it was built without a permit from the so-called Civil Administration Office, the administrative branch of the illegal Israeli occupation.

Last year, the soldiers demolished two homes owned by a member of the Taha family in the same area of the town.

On Thursday morning, Israeli military and police vehicles invaded Silwan town, south of the Al-Aqsa Mosque in occupied Jerusalem and handed a demolition order to a Palestinian elder.

In Hebron city, the soldiers abducted Odah Sa’id Nassar, 23, while walking in the Bab az-Zawiya area in the center of the city during protests that took place in the area.

Also, On Thursday morning, the Palestinian Health Ministry confirmed the death of a Palestinian child, Mohammad Fadi Nouri, 16, whom Israeli soldiers shot and seriously injured more than three weeks ago in Betunia town, west of Ramallah, in the central part of the occupied West bank.