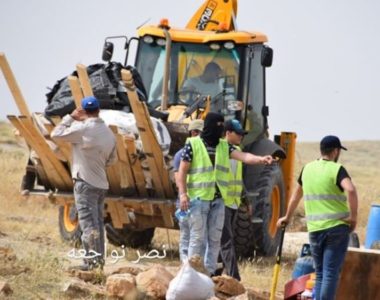 Rateb Jabour, the media coordinator of the National and Popular Committees against the Annexation Wall and Colonies in southern Hebron, said several army jeeps invaded the area, before sealing it and surrounding the home.

He added that the soldiers then invaded the home, owned by Jibreel Mahmoud al-‘Adra, and forced the family out before demolishing it.

The army claims the property was built without a permit from the Israeli “Civil Administration Office,” the executive and administrative branch of the illegal Israeli occupation in the West Bank.

Before demolishing the property, the soldiers invaded the Susiya village, and destroyed a residential tent, inhabited by Hussein Radi Nawaj’a.

It is worth mentioning that the area has recently witnesses a serious Israeli escalation, targeting many homes, sheds and other structures, as part of Israel’s illegal construction and expansion of its colonies.

In the 1970’s, Israel enforced a “firing zone” for its soldiers’ training in Masafer Yatta, after expelling the Palestinians, and later allowed them back, but continued to target their homes and structures, as the threat of being displaced, yet again, is always present.

It is worth mentioning that, except for a small part, Masafer Yatta, also known as Southern Hebron Hills, is in Area C (around 62%) of the occupied West Bank, under full Israeli civil and military control, and while the Palestinians continue to face demolitions and violations, around 3000 Israeli colonists illegally live in the area.

According to the Israeli Information Center for Human Rights in the Occupied Territories (B’Tselem), there are an estimated 622,670 settlers in the West Bank.

It stated that the “figure is derived from two sources: According to data provided by Israel’s Central Bureau of Statistics (CBS), at the end of 2017, 413,400 people were living in the settlements of the West Bank, excluding East Jerusalem. According to data provided by the Jerusalem Institute for Israel Studies, the population of the Israeli neighborhoods in East Jerusalem numbered 209,270 people at the end of 2016.”