Ambassador Mansour: Situation in Palestine Going “From Bad to Worse” 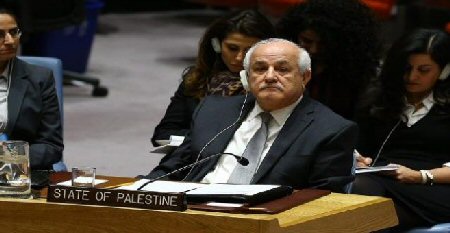 The UN Security Council discussed, on Monday, in an open meeting chaired by Germany (the President of the Security Council for this month), the situation in Palestine over the past four months.

The Palestine envoy to the United Nations, Ambassador Riyad Mansour, said, in his address to the Council, that the situation is going from bad to worse, due to the practices of the Israeli occupation, the continued settlement activity, the demolition of homes and the targeting of civilians, especially children, by killing or arrest.

“We reject the American peace plan, and reiterate that any initiative that is not based on international law and UN resolutions, or does not respect human rights, will be unfair and will not work,” Mansour said, according to the PNN.

“The international law is clear in this regard, and Security Council Resolution 2334 of 2016 states that no change should be recognized in the areas within the 1967 borders, including occupied Jerusalem,”

Mansour also tackled the US administration’s recognition of Israel’s sovereignty over territory it occupies, in reference to  the occupied Syrian Golan Heights.

“The Security Council declared, in 1981, that the annexation of the Golan Heights has no legal status, which applies to all the territories occupied since 1967. We do not only reject the American recognition of Israel’s sovereignty over occupied territory, but we also believe that it is the duty of other countries not to comply with any change, and to accept any new situation arising out of violation of international laws.”

Mansour added that the international silence and the failure to hold Israel accountable for its crimes and violations are the main reasons for the ongoing attacks on Palestinians and the confiscation of their lands, the arrest of children and the terror of civilians, the siege of Gaza, the suppression of weekly demonstrations in the Gaza Strip and the theft of a large part of Palestinian tax revenues.

On the other hand, Mansour praised the international community’s support for UNRWA, pending a just solution for the Palestinian refugees. He also praised Jordan’s role in preserving the Islamic and Christian sanctities in Jerusalem and the reconciliation efforts being carried out by Egypt and Russia.

Representatives of 50 countries spoke at the meeting of the Security Council, and the United Nations Under-Secretary-General for Political Affairs Rosemary DiCarlo first briefed the Council on the situation in Palestine during the first quarter of this year, including Israel’s announcement of the establishment of 2,100 new settlement units, Or the seizure of 37 facilities and the displacement of 49 Palestinians for lack of building permits, which are already difficult for Palestinians to obtain.