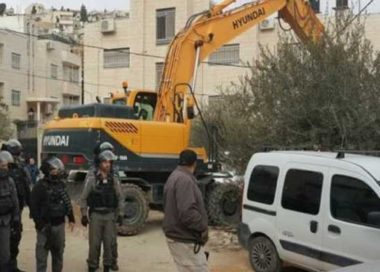 They added that the soldiers were extensively deployed in the streets and alleys, before demolishing a home, owned by members of Houshiyya family, near the Annexation Wall which separates Shu’fat from Pisgat Ze’ev illegal colony.

The Israeli army claims that the Palestinian home was built without a permit from the City Council, in occupied Jerusalem.

Also on Tuesday, the soldiers demolished a Palestinian home, owned by a lawyer in Bir ‘Ona area, in Beit Jala city, west of Bethlehem, in the occupied West Bank.