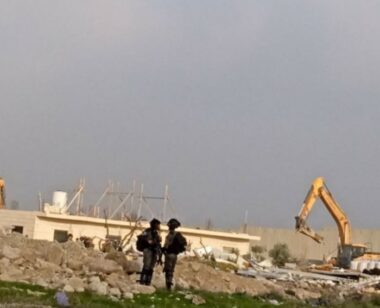 On Thursday morning, Israeli soldiers demolished a Palestinian home in Anata town, northeast of the occupied capital, Jerusalem, in the West Bank.

Media sources said the soldiers invaded the al-Baq’an neighborhood in the town after surrounding it before forcing the Palestinians out of their property.

They added that the soldiers demolished a home, consisting of two flats, owned by Raed Hajjaj Fheidat, allegedly for being built without a permit.

It is worth mentioning that the soldiers also demolished a room that was part of a building destroyed by the soldiers a month ago.