Army Demolishes A School Near Hebron 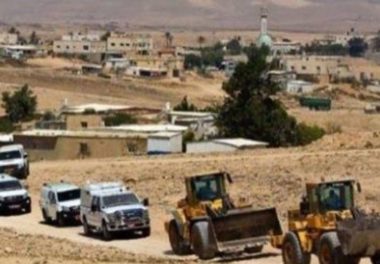 Israeli soldiers invaded, Wednesday, the Sammoa’ town, south of Hebron, in the southern part of the occupied West Bank, and demolished a Palestinian school.

Media sources in Hebron said the soldiers surrounded Seemia area, north of the Sammoa’ town, and declared it a closed military zone, preventing the Palestinians from entering it.

They added that the soldiers then used their armored bulldozers to demolish the Tahadi 13 small school of several classrooms and their facilities.

The school was sponsored by the Palestinian Ministry of Education through European funding, with a total cost of 40.000 Euros, and was supposed to open in two days.

The Ministry of Education denounced the ongoing Israeli violations, targeting educational facilities and students, and added that the school is located in Area C of the West Bank, under full Israeli military and administrative control.

The school was built to make it easier for students in that area to reach it, especially due to Israeli military roadblocks and restrictions imposed by the military in various areas of Hebron.

It is worth mentioning that the soldiers have demolished many Tahadi schools in that same area, and other parts of the West Bank, as part of Israel’s illegal attempts to confiscate the lands to use them for military purposes and colonialist activities.