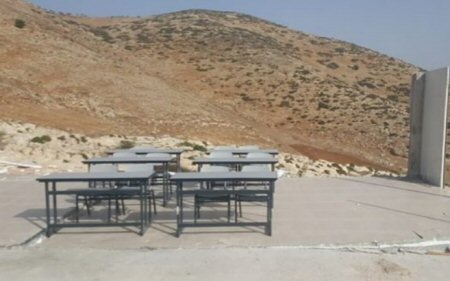 On Tuesday morning, Israeli occupation forces dismantled caravans belonging to the school of the Late Marwan Majali, AKA “Tahadi (10)”, located in Khirbat “Ibiziq” area, to the north of Tubas, northern West Bank.

The Director of Education Tubas Sa’ed Qabha told WAFA that the occupation dismantled two caravans as they detain the educational staff, ministry of education and students, while preventing students from entering the school.

The Ministry of Education and Higher Education condemned the acts of destroying and confiscating the school caravans and detaining teaching staff.

The ministry said, in a statement, that the destruction of the school is a war crime added to the series of crimes of the occupation escalating the right to education and its institutions.

The ministry also said, according to the PNN, that the occupation aggression and its continuing violations against the schools in the targeted and remote areas will not discourage the family members from continuing education, but rather ensures their insistence to receiving their right to secure education.

The ministry renewed its call to all international and legal institutions and organizations to take their responsibilities regarding exposing violations against the right to education and raising them in all fields and forums.

Residents of the area have repeatedly been evicted by Israeli forces, for the purpose of operating Israeli military drills, while the apartheid wall was erected on its lands.