PPS: “Army Abducts 15 Palestinians, Including Children And One Woman, In West Bank” 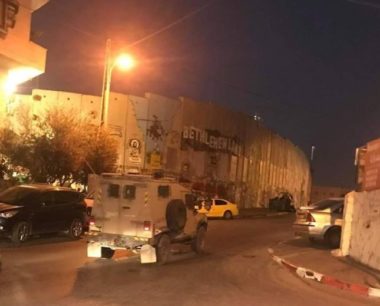 Israeli soldiers abducted, overnight and on Tuesday morning, fifteen Palestinians, including children, and one woman, from several parts of the occupied West Bank.

The soldiers abducted one woman, identified as Islam Oweida, 25, while visiting her imprisoned husband Abdullah Obeyyat, while Abdullah’s brother, Hussein Obeyyat, 17, was abducted from his home, in Bethlehem.

The soldiers also abducted three Palestinians from Qabatia town and Jenin refugee camp, while on their way to Nablus.

In addition, the army installed many roadblocks across the West Bank, especially in many areas in Hebron governorate, in southern West Bank, before stopping and searching dozens of cars, and interrogated many Palestinians while inspecting their ID cards.

In occupied Jerusalem, the soldiers abducted a child, identified as Jihad Jawad Abu Rammouz, 15, from his home in the al-Bustan neighborhood in Silwan town, south of the Al-Aqsa Mosque.