Soldiers Abduct Three Palestinians, Including A Child, In Hebron, Ramallah And Jerusalem 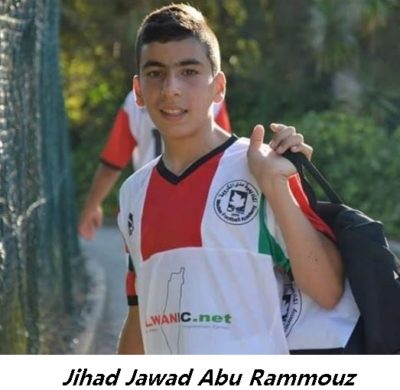 The Palestinian Prisoners’ Society (PPS) has reported that Israeli soldiers abducted, on Monday a night and Tuesday at dawn, three Palestinians, including one child, from their homes in Hebron, Ramallah, and Jerusalem, in the occupied West Bank.

The Hebron office of the PPS, in southern West Bank, said the soldiers invaded, at dawn Tuesday, Beit Ummar town, north of the city, searched homes and abducted a young man, identified as Mohammad Khaled Sabarna.

It added that the soldiers invaded several neighborhoods in Hebron city, and attacked Palestinian protesters.

The soldiers also installed roadblocks at the main entrances of Sa’ir and Yatta towns, in addition to the northern and southern entrances of Hebron city, before stopping and searching dozens of cars, and interrogated many Palestinians while inspecting their ID cards.

In Ramallah, in central West Bank, the soldiers searched several homes after invading a few communities in the governorate, and abducted a young man, identified as Fawzi Maher.

Late on Monday at night, the soldiers abducted a child, identified as Jihad Jawad Abu Rammouz, 15, from his home in the al-Bustan neighborhood in Silwan town, south of the Al-Aqsa Mosque, in occupied Jerusalem.

In addition, the army invaded Doha town, west of Bethlehem in the occupied West Bank, and shot a young man, in addition to abducting a teenage boy in the Deheishe refugee camp, south of the city.

In related news, the soldiers abducted three Palestinian children, including two siblings for their homes in Qalqilia governorate, in the northern part of the occupied West Bank.

It is worth mentioning that the Israeli army said its soldiers arrested twelve Palestinians, during invasions and searches of homes in various parts of the West Bank, especially in Nablus, Hebron, Ramallah and Tulkarem.

Most of them were abducted for their participation in the popular nonviolent processions against the ongoing illegal occupation, the Annexation Wall and the colonialist activities.