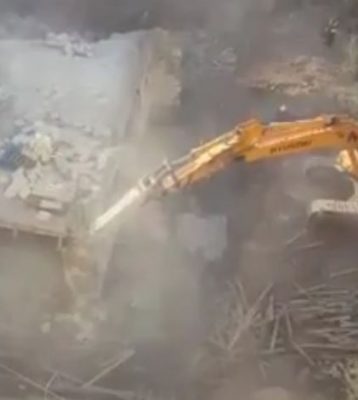 Israeli soldiers invaded, early on Wednesday morning, the al-‘Isawiya town, in the center of occupied East Jerusalem, and demolished an under-construction two-story building.

Mohammad Abu Ryala, a member of the Follow-Up Committee in al-‘Isawiya, said that the family received an order to halt the construction of their property in order to obtain a construction permit from the City Council.

He added that the family headed to the City Council and started the lengthy and hefty procedure, but the army and the city proceeded with the demolition before a final ruling or arrangements were reached.

The city did not even inform the family that it already set the date for demolition their property, and the demolition came as a surprise.

It is worth mentioning that, since Israel occupied East Jerusalem in 1967, al-Isawiya became a target for ongoing illegal destruction, annexation and confiscation of homes and lands, while thousands of illegal colonialist units have been built there, in addition to lands that were confiscated to build facilities for the Hebrew University, and Hadassah Medical Center.

While Israel cites “natural growth of population” to build and expand illegal colonies on Palestinian lands, the Palestinians have lost many homes to these demolitions, while dozens more have received demolition orders.

Israel has not been granting the Palestinians in the town any construction permits, an issue that forces the expanding families to take the risk to build, despite the looming threats of demolition.

On Wednesday at dawn, dozens of soldiers invaded the town of Beit Surik, northwest of occupied East Jerusalem, and detonated the family home of a Palestinian who was killed by near Hadar Adar illegal Israeli colony, last September, after killing three Israeli security officers.