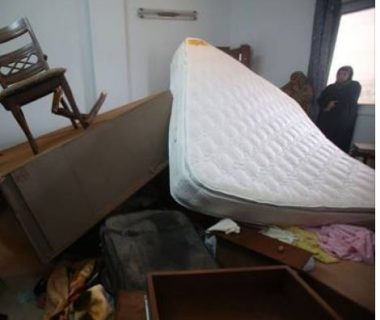 Israeli soldiers invaded, on Wednesday at dawn, many homes in the at-Tour neighborhood, overlooking Jerusalem’s Old City, and abducted fourteen Palestinians, including children, after violently searching their homes, and took them to several detention and interrogation facilities.

The soldiers interrogated many Palestinians while inspecting their ID cars, in their homes, before abducting the twelve Palestinians.

Earlier on Wednesday morning, the soldiers invaded the al-‘Isawiya town, in the center of occupied East Jerusalem, and demolished an under-construction two-story building.

On Wednesday at dawn, dozens of soldiers invaded the town of Beit Surik, northwest of occupied East Jerusalem, and detonated the family home of a Palestinian who was killed by near Hadar Adar illegal colony, last September, after killing three Israeli security officers.