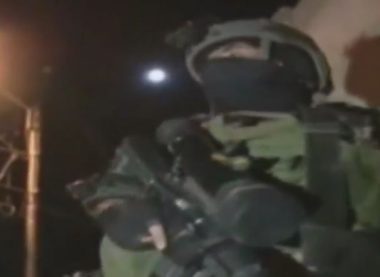 Several Israeli army jeeps invaded, on Wednesday at dawn, the towns of Fahma and ‘Ejja, south of the northern West Bank city of Jenin, and photographed homes and streets.

The soldiers invaded many neighborhoods in the two towns, and photographed many homes and streets, before detaining a young man, identified as Jasser Waleed Qawasma, a student of Hebron University.

The young man was released after the soldiers detained and interrogated him for several hours.

The soldiers also fired many gas bombs and concussion grenades at local youngsters, who hurled stones at the invading army jeeps.

In related news, the soldiers invaded many homes in the at-Tour neighborhood, overlooking Jerusalem’s Old City, and abducted fourteen Palestinians, including children, after violently searching their homes, and took them to several detention and interrogation facilities.

Earlier on Wednesday morning, the soldiers invaded the al-‘Isawiya town, in the center of East Jerusalem, and demolished an under-construction two-story building.

Furthermore, dozens of soldiers invaded the town of Beit Surik, northwest of East Jerusalem, and detonated the family home of a Palestinian who was killed by near Hadar Adar illegal colony, last September, after killing three Israeli security officers.