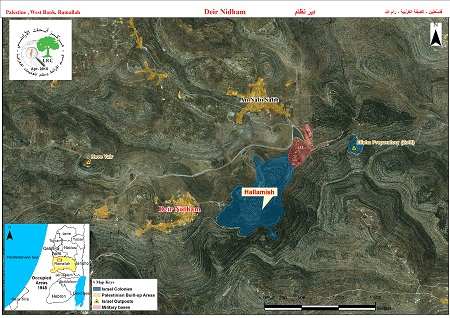 Palestinians in the village of Deir Nitham, near Ramallah in the central West Bank, have been unable to leave their village since Monday, when Israeli forces closed the gate through the Wall that allowed villagers to access the rest of the world.

Now, the entire population of the village has been imprisoned, sealed off from any access to schools, hospitals, stores and work, since the Israeli military decided to punish the village in retaliation for alleged stone-throwing by some village youth.

Deir Nitham is located in between areas that Israel is attempting to annex to Greater Jerusalem and the rest of the West Bank, so the Israeli government constructed the Annexation Wall around the village, only allowing villagers in and out at certain times.

According to the Israeli military, the village was sealed because of stone-throwing by youth from the village towards a road used by Israeli settlers to access their housing development, constructed on what used to be village land.

The Israeli Jewish-only settlement was constructed on land that was confiscated by the Israeli military for ‘security purposes’, then turned over to private Israeli developers to transfer Israeli civilians onto the land.

According to villagers, since the town was sealed off, Israeli soldiers have entered and raided homes, as well as patrolling the streets of the village and telling villagers they are there to “protect the Israeli settlers” from stone throwing.

The United Nations has repeatedly condemned this ghettoization of towns like Deir Nitham, and the sealing of entire villages, as a form of ‘collective punishment’ which is a direct violation of Israel’s responsibilities as an occupying power under the Fourth Geneva Convention.