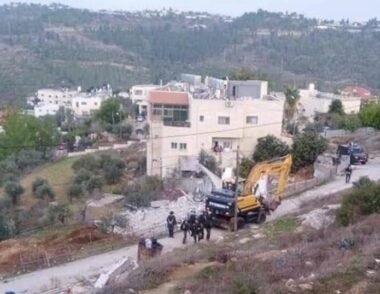 Israeli soldiers demolished, Thursday, a Palestinian home, a wall, and sheds in the al-Walaja village, northwest of Bethlehem city, south of occupied Jerusalem in the West Bank.

Media sources said several army jeeps, and a bulldozer, invaded the Ein Jweiza area, northeast of the village, before demolishing a home and a retaining wall, owned by Mohammad Abu al-Haija.

They added that the soldiers also demolished several sheds owned by members of the Abu at-Teen family.

The army claims the demolished structures were built without a permit from the “Civil Administration Office,” the administrative branch of Israel’s illegal occupation of the West Bank.