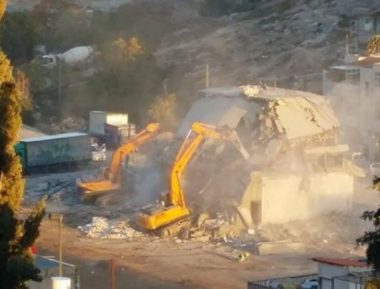 Dozens of soldiers, accompanied by two bulldozers, invaded Wadi al-Jouz approximately at 4:30 at dawn, and surrounded a residential building, before demolishing it.

The building consisted of three levels; the first was used as a warehouse for storing food products, while the second was an apartment and the third was still under-construction.

The family was not allowed to remove its belonging before the soldiers demolished the building.

Also, the soldiers invaded the al-‘Isawiyya town, and demolished a residential building, under the pretext of being built without a permit.