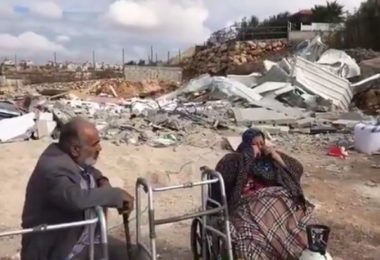 Media sources said the soldiers surrounded the ash-Qariyya neighborhood, in Beit Hanina, and declared it a closed military zone.

They added that the soldiers stormed the two homes, owned by Kamel Rajabi, and his sons Mohammad and Adel, forced the families out, without allowing them to remove their furniture and belongings, and demolished the property.

The soldiers resorted to the excessive use of force against the families, causing anxiety attacks among many of their children.

Resident Mohammad Rajabi said the soldiers smashed the main doors of the two homes before invading them, and added that twelve members of his family, including five children, were rendered homeless. He added that the homes were built four months ago, adding that he lived in the property along with his psychically-challenged parents, in addiition to his brother and his family.

Mohammad Rajabi said the homes were built four months ago, and adding that the City Council then decided to demolish them before the families obtains a temporary order, halting the demolitions.

It is worth mentioning that Kamel suffered a nervous breakdown, when the soldiers started demolishing the homes, and was moved to a local hospital.

In related news, the soldiers demolished a commercial structure, owned by Mohammad Odah, in Be’er Ayyoub, in Silwan town, in Jerusalem.