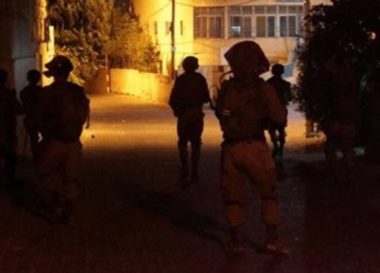 The Palestinian Prisoners’ Society (PPS) has reported that Israeli soldiers abducted, overnight until morning hours Tuesday, at least eighteen Palestinians, including a wounded young man, in several parts of the occupied West Bank.

The PPS office in Hebron, in the southern part of the occupied West Bank, said the soldiers invaded and ransacked many homes, before abducting seven Palestinians.

It said that the soldiers abducted Mohannad Abdul-Fattah Rajabi, 23, who was shot with seven live Israeli army rounds in his right leg, two years ago, and is still receiving medical treatment.

The PPS warned that the detainee will likely face serious complications, especially since he needs surgery, and requires rehabilitation, constant treatment and follow-up.

The PPS stated that the soldiers smashed the main door of Falah’s home, and violently searched the property, causing excessive property damage, in addition to striking his son, Haidar, with their clubs and rifles.

In addition, the soldiers abducted two Palestinians, identified as Ahmad Shaban Nofal and Mohammad Essam Khaled, from their homes in Qalqilia, in northern West Bank.

In the Zawiya town, in Salfit governorate, the soldiers abducted Adham Ismael Saber.

It is worth mentioning that the soldiers abducted, on Monday evening, Majed Rajabi, 34, at a military roadblock near the Ibrahimi Mosque, in the southern West Bank city of Hebron, and Mohammad Abu Arram, from Yatta town, south of Hebron.