Soldiers Shoot A Woman Allegedly For Attempting To Stab Them 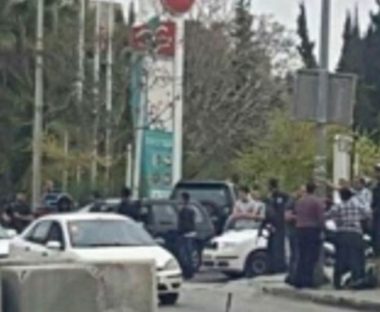 Israeli soldiers shot, Tuesday, a Palestinian woman at a gas station near the entrance of Kfar Adumim illegal colony, which was built on Palestinian lands in the al- ‘Ezariyya town, east of Jerusalem, after she reportedly attempted to stab them.

Israeli sources quoted the military claiming that “the woman carried a sharp object, and attempted to stab the soldiers, before they shot her.”

The military claimed that the woman entered a Falafel shop before the owner “noticed her and asked her to leave,” and added that “when she refused, he called the police, who arrived at the scene but could not find her, and initiated a search before locating her nearby.”

It added that the “soldiers initiated the protocol of placing her under arrest, but she refused and pulled a pair of scissors and ran towards them while shouting in Arabic, before they shot her.”

The army also alleged that the soldiers “found a knife in the woman’s handbag, and another knife near her.”

The wounded Palestinian woman, 37, is from Yatta town, south of Hebron in the southern part of the occupied West Bank; she suffered moderate wounds before she was moved to Hadassah hospital in occupied Jerusalem.