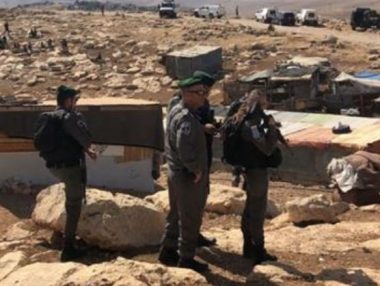 The soldiers demolished 40 residential sheds and barns in the community.

Waleed Assaf, the head of the Committee against the Israeli Annexation Wall and Colonies, said the residential sheds are in two areas in Abu Nuwwar community.

He added that the soldiers demolished the structures, displacing the families, while dozens of soldiers have also been deployed in the area, in preparation for the destruction of al-Khan al-Ahmar nearby community.

Bedouin Palestinian communities continue to be displaced due to Israel’s illegal occupation and policies, repeatedly ousting them the same way they were exiled from lands they inhabited in the Negev and other areas, prior to the establishment of Israel, in the historic land of Palestine in 1948.