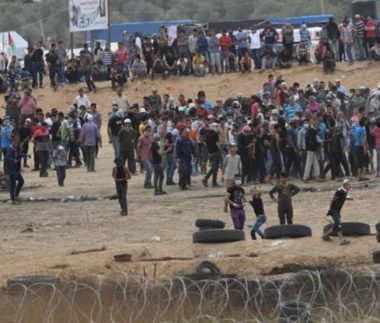 As hundreds of Palestinians started gathered near five border areas, along the eastern parts of the Gaza Strip to prepare for this Friday’s Great Return March, Israeli soldiers stated fires high velocity gas bombs at them, while more military units have been deployed there.

The army also deployed more sharpshooters across the border fence near Rafah and Khan Younis, in the southern part of the Gaza Strip, in addition to Gaza city, al-Boreij in central Gaza, and Jabalia in the northern part of the coastal region.

The soldiers fired high-velocity gas bombs at them, causing many to suffer the effects of teargas inhalation, mainly in Khuza’a town, east of Khan Younis.

The soldiers also placed more sand hills and large concrete blocks across the border fence, while military drones started hovering over border areas in several parts of the Gaza Strip.

Today is the last Friday before the “Great Return March” which will be held on May 15, which marks the Palestinian Nakba when Israel was established on %78 the historic land of Palestine in 1948 after destroying more than 530 villages and cities, and controlling 774, turning at least 700.000 Palestinians intro refugees.

During the Nakba, Zionist forces committed more than 70 massacres against the Palestinians, killing at least 15.000.