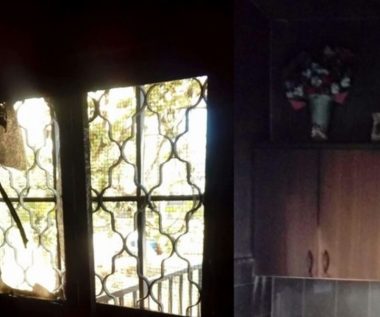 A group of fanatic illegal Israeli colonizers hurled, on Friday at dawn, fire bombs at a home of the Dawabsha family in Douma village, south of the northern West Bank city of Nablus.

Media sources in Nablus said the Israeli assailants hurled many firebombs into the home of Yasser Ahmad Dawabsha, as he and his family were sleeping.

They also caused damaged to the iron bars on the windows of the house and fled the scene.

The family, and neighbors rushed to extinguish the fire before Palestinian firefighters arrived at the scene and safely extinguished it.

Although the attack led to excessive property damage, the family managed to escape physically unharmed.

It is worth mentioning that on July 30th 2015, a group of terrorist Israeli colonizers hurled firebombs into the home of Sa’ad Dawabsha, 32, in a similar dawn attack, leading to his death along with his wife Reham, 27, and their 18-month-old Ali. The only survivor was their son Ahmad, 5,