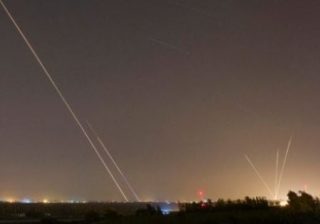 The Israeli Air Force carried out, on Thursday at dawn, two air strikes targeting two centers of the al-Qassam Brigades, the armed wing of Hamas, in the Gaza Strip. The army said it was retaliating to shells fired from Gaza.

Media sources have reported that the army fired two missiles into a Qassam center, southwest of Rafah, in the southern part of the Gaza Strip, and at least one missile into another center, west of the Nusseirat refugee camp, in central Gaza.

The attacks led to excessive property damage to the centers, and nearby homes; there has been no immediate reports of casualties.

The bombardment came after the army declared, late at night, that “several shells were fired into settlements” near the border fence.

The army claimed the shells landed and detonated in border areas near Sha’ar HaNegev settlement, causing the Red Alert siren system to sound, but led to no damage or injuries.

A group calling itself ‘Omar Hadeed Brigades,” of the Salafist Ansar Beit al-Maqdis organization, claimed responsibility for firing the shells, although the statement could not be verified.

The group, that affiliates itself with ISIS terrorist organization, previously threatened, challenged and even attacked Hamas and its Qassam Brigades, causing several casualties.

It also carried out a number of bombings in Gaza, and even issued videos and statements threatening Hamas, and vowing further bombings.