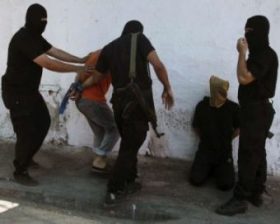 Hamas legislators in the Gaza Strip, and the Hamas movement, said they intend to allow the execution of 13 Palestinians, convicted with several crimes, without the approval of the president, as stated in the Palestinian Law. The Palestinian Center for Human Rights calls for abolition of capital punishment.

Thirteen Hamas legislators in the Gaza Strip, and without the approval from the rest of the legislators in occupied Palestine, gave a green light, on Wednesday, for the execution of 13 Palestinians.

This came after several Hamas officials in Gaza said they intend to organize a series of public executions, in the coastal region.

The number of Hamas legislators who convened and came up with the decision remains unknown, the same applies to the way they authorized themselves to reach such decisions without the approval of the Legislative Council, and above all, the approval of President Mahmoud Abbas, who by the law, must be the only who gives the final signature before any execution is carried out.

However, since the bloody internal conflict of 2007, and the resulting division and anonymity between Fateh and Hamas, and the de facto two separate “governments” in Gaza and the West Bank, Hamas said it does not recognize the legitimacy of Abbas, and started carrying out executions without his approval.

Palestinian Attorney General, Dr. Ahmad Barrak, in a statement that carrying out the death penalty against any convicted person, without following all laws and regulations, violates the basic justice laws, and all related human rights agreements that must be followed, in addition to causing unrest among the public.

He added that Section 2 of the Palestinian Penalty Law #3 of the year 2001, stated that execution cannot be carried out without the president’s approval, under article #406, as the Justice Minister must transfer such cases to the president once all appeals are concluded.

As for public executions, Dr. Barrak said that Article #418, of the Penalty Law clearly state executions must only be performed in state-run prisons, and not in public or any other place.

The internationally renowned Palestinian Center for Human Rights (PCHR) has repeatedly fought for a complete abolition of capital punishment in Palestine, and expressed its deep shock and concern regarding the easy application of the death penalty in the Palestinian territories, especially in Gaza.

It also called on the General Prosecutor in Gaza to stop the practice of sending civilians to military courts, and to prosecute them in ordinary courts, in compliance with the Palestinian Law.

In addition, the PCHR also repeatedly called on the Palestinian President to sign the Second Protocol of the International Covenant on Civil and Political Rights that abolishes the death penalty, and to issue a presidential decree against it, until the Palestinian Legislative Council manages to fully convene and void this type of punishment.

The PCHR called on the Legislative Council, if and when it manages to convene, due to Israeli violations, closure and abductions of legislators, and the ongoing political divisions between Hamas and Fateh, to reconsider all of the legislations regarding capital punishment, especially Egyptian Penalty Law #74 of 1936, operational in Gaza, and the Jordanian Law #16 of the year 1960, operational in the West Bank.

It said that the Palestinian legislations should be coherent with all international agreements and human rights treaties, signed by the Palestinian Authority, including the complete abolition of Capital Punishment.

The center further said that its demands do not mean being lenient towards civilians convicted of violent and very serious, dangerous crimes, but it means passing legislation that are deterrent but humane at the same time.