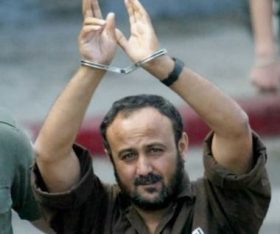 The Israeli Authorities moved, Tuesday, the imprisoned senior political leader, legislator Marwan Barghouthi, from the Ramon prison in the Negev Desert, to an unknown prison, just a few days after he was moved there.

His wife, Fadwa, said Barghouthi was moved to Ramon prison, just a few days ago, and was prevented from interacting with other detainees in various sections of the detention center.

Fadwa added that this was the first time Barghouthi is moved from Hadarim prison, where he was held for ten consecutive years, largely in solitary confinement.

The International Campaign for the Release of Marwan Barghouthi & All Palestinian Prisoners, strongly denounced the Israeli decision, and said it is just the latest in a serious of violations against the detained internationally renowned political leader.

It added that the violations against the detainees can never defeat their strong will and determination in the face of constant assaults, physical and psychological pressures.

On May 17, 2016, leading Belgian Members of Parliament from across the political spectrum in both the House of Representatives and the Senate announced their nomination of Marwan Barghouthi for the Nobel Peace Prize.

TIMELINE by the International Campaign for the Release of Marwan Barghouthi

1959: Born in the village of Kobar, in the West Bank, Palestine.

1978: Arrested for the first time for belonging to Fatah.

1984: Elected President of the Birzeit University Council of Students.

1987: Banished to Jordan. Member of the High Level Committee for the 1st Intifada.

1994: Returns to Palestine following the Oslo agreements, and is elected Fatah’s Secretary general for the West Bank.

1996: Elected in the first elections of the Palestinian Legislative Council.

2002: Abducted by Israeli occupation forces from Ramallah. First Member of Parliament to be arrested by Israel.

2004: After having refused to recognize any legitimacy to the Occupation courts, especially to judge an elected representative of the Palestinian people, he is sentenced to 5 life sentences and 40 years in prison.

2006: Heads Fatah list in the general elections whilst in an Israeli jail, and is reelected Member of the Palestinian Legislative Council.

2006: Elaboration of the Prisoners’ Document for national unity, co-signed by leaders of all political factions.