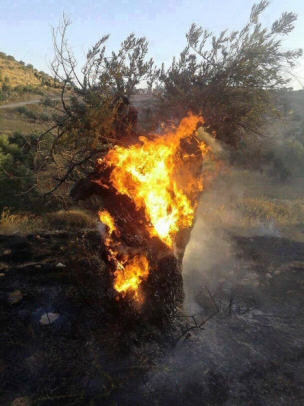 A Palestinian-owned land located adjacent to Solomon’s Pools wall, to the south of Bethlehem, was set on fire late Friday night, due to the firing of light flares by Israeli forces, according to WAFA security sources.

Israeli forces fired light flares over a land in Bethlehem, resulting in the burning of trees and grass. The Palestinian civil defense rushed to the scene and managed to control the fire.

Such reports are recurrent, as of late, rousing suspicions of deliberate sabotage on the part of the Israeli army.

UNRWA Statement on Punitive Israeli Demolitions, Use of Explosives