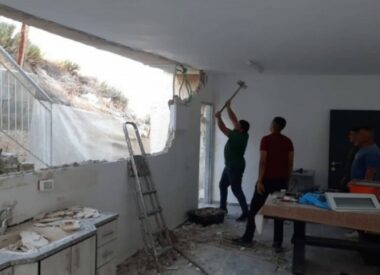 The Israeli army forced Saturday, a Palestinian to demolish his under-construction home in Wadi ar-Rababa neighborhood, in Silwan town, south of the Al-Aqsa Mosque, in occupied Jerusalem.

The Wadi Hilweh Information Center In Silwan (Silwanic) said the home is owned by Ahmad Younes Abu Hadwan, and was built on his land.

Silwanic added that Abu Hadwan had to demolish his 50 square/meter under construction home using basic handheld tools to avoid the excessively high fines and fees, especially if the City Council in occupied Jerusalem uses its workers and equipment.

It is worth mentioning that the family stopped the construction of their home ten years ago, after receiving a demolition order, and have since been going to court and trying to obtain all needed permits and documents.

In addition, the soldiers abducted, on Saturday evening, two young Palestinian men in occupied Jerusalem in the West Bank.

On Friday, the soldiers abducted Mohammad Abu al-Hummus, a known nonviolent activist against the illegal Israeli colonialist activities, during a procession in Sheikh Jarrah neighborhood, in Jerusalem.

The soldiers also summoned for interrogation three young men from the al-Isawiya town, in Jerusalem.