Soldiers Force A Palestinian To Demolish His Home In Jerusalem 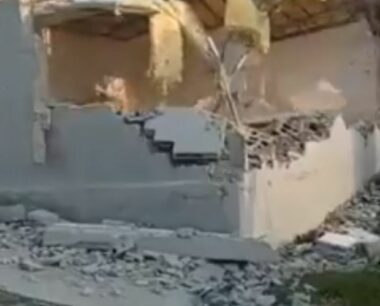 On Monday, the Israeli army, and the City Council in occupied Jerusalem, forced a Palestinian man to demolish his under-construction home in Jabal al-Mokabber, in the city.

Media sources said the soldiers forced Amjad Mosallam Ja’abis to demolish him property under the pretext of being built without a permit.

They added that the property is in the al-Bashir (The American Street) in Jabal al-Mokabber.

The Palestinian was only given five days to demolish his property or face excessively high fines and fees if the city destroys the property using its own workers and equipment.

Israel’s policy of home demolitions is an illegal act of collective punishment that violates International Law and various international treaties.