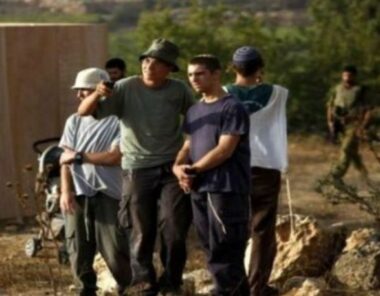 During an inspection visit to the site of the vandalized reservoir, head of the Palestinian Water Authority (PWA), Mazen Ghneim, decried the sabotage by Israeli settlers of the reservoir as “a systematic and serious violation of the basic human rights”, particularly that it resulted in depriving over 6,000 Palestinians of water, particularly during the Ramadan fasting month.

He added that the settlers came from Yitzhar, an illegal settlement inhabited by hardcore fanatic colonialist settlers while pointing that it was not the first act of settler vandalism against the site.

He pledged that PWA would spare no effort to rehabilitate the reservoir and restore the water supply to the villagers, as he urged local and international human rights organizations to document Israeli settler and occupation authorities’ assaults and help bring perpetrators to account.

Settlers‘ violence includes property and mosque arsons, stone-throwing, uprooting of crops and olive trees, attacks on vulnerable homes, among others.

Over 700,000 Israelis live in Jewish-only settlements across occupied East Jerusalem and the West Bank in violation of international law.