Army Forces A Palestinian To Demolish His Shed And Barn 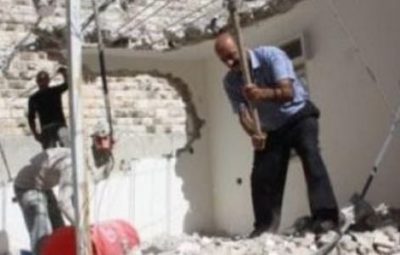 Earlier on Monday morning, Israeli soldiers forced a Palestinian to demolish his own barn and shed in Sabastia town, northwest of the northern West Bank city of Nablus.

The Palestinian, Abdullah Jamal Makhamra, said the soldiers handed him a demolition order, on Sunday evening, informing him that he has until dawn Monday to demolish his properties, and threatened to force him to pay a 15.000 Israeli Shekels fine should the army demolish them.

Makhamra said that he, and dozens of residents of Sebastia had to remove more than 130 sheep from his 350 square/meter shed, and emptied his 200 square/meter barn, and added that his losses are close to 50.000 Shekels.

The Palestinian also said that he received a similar order four months ago, and went to the military base in Huwwara, but the army refused to grant him a license, although the properties are built on his own lands.

The area is classified as “Area C”, under full Israeli military, security and administrative control, where the Palestinians are rarely granted a permit, while Israel continues to build and expand its illegal colonies.

The Israeli Information Center for Human Rights in the Occupied Territories (B’Tselem):

Area C, which comprises about 60 percent of the occupied West Bank, and which Israel views as primarily meant to serve its own needs.

Accordingly, Israel acts to establish facts on the ground so as to create a reality that would be difficult to change. The state takes action to displace and expel Palestinians citing flimsy legal pretexts.

For example, one reason given for home demolition is “illegal construction” – an untenable argument given the absence of any real possibility for Palestinians to build legally.