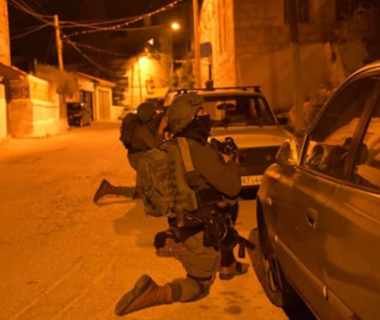 Israeli soldiers injured, on Sunday at night, 21 Palestinians, and abducted one, during protests that erupted after several army jeeps invaded Beita town, south of the northern West Bank city of Nablus.

Ahmad Jibril, the head of the Ambulance and Emergency Department at the Red Crescent Society in Nablus, said the medics provided treatment to twelve Palestinians who suffered the effects of teargas inhalation, one who was shot with a gas bomb, and eight who suffered lacerations and bruises.

Jibril added that the medics provided the needed treatment to the wounded Palestinians and moved four to a hospital in Nablus.

It is worth mentioning that Beita witnesses nightly invasions and ongoing protests since May 5th after illegal Israeli colonialist settlers occupied Palestinian lands and installed an outpost on Abu Sbeih Mountain, leading to protests.

During the protests and invasions, the soldiers killed five Palestinians and injured more than 618.