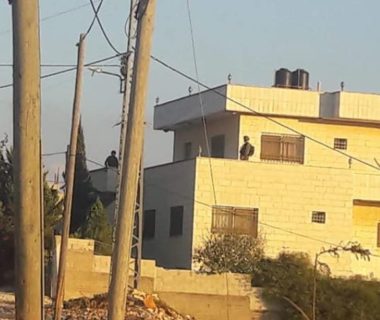 Israeli soldiers injured, on Saturday evening, 23 Palestinians after they intercepted illegal colonialist settlers, who were infiltrating by car into the southeastern area of Kufur Qaddoum town, east of the northern West Bank city of Qalqilia.

Morad Eshteiwi, the coordinator of the Popular Committee in Kufur Qaddoum, said dozens of soldiers invaded the town, after the Palestinians uncovered the infiltration of the colonists.

The Palestinians, who exposed the infiltration, are from the local committee, which was formed years ago, to monitor the town for similar invasions and attacks, and warn the families.

The Palestinian Red Crescent Society said the soldiers instantly invaded the town after the colonists were exposed, and fired dozens of live rounds, rubber-coated steel bullets, gas bombs and concussion grenades at the Palestinians, wounding 23 who suffered cuts and bruises and the severe effects of teargas inhalation.

The soldiers also invaded homes, and occupied their rooftops, to use them as monitoring posts to secure the colonists’ retreat, and fire at the protesters.

Eshteiwi said the Palestinians, and their local guards committee, will continue to protect their homes and lands, especially in the neighborhoods close to the illegal colony.

The invasion lasted about an hour, and troops left along with the settlers who came from the nearby illegal Israeli settlement of Kedumim, which was built on Palestinian lands.

Kufur Qaddoum is the scene of weekly protests since 2013, the residents protest the Israeli army closer of the main entrance leading in or out of the village to enable easy access for the settlers driving to and from the illegal Kedumim colony.

Since the beginning of this week, the colonists have escalated their violations against Palestinian all over the West Bank, attacking cars, buses and towns, leaving scores injured in addition to damaged Palestinian vehicles and property.