Army Injures 33 Palestinians, Including A Medic, Near Jerusalem 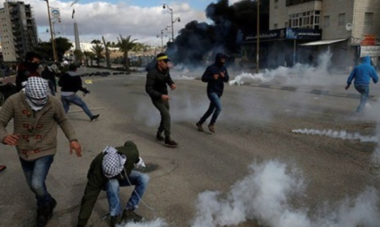 The Palestinian Red Crescent Society (PRCS) said its medics provided treatment to 33 Palestinians in both towns, among them twelve who were shot with rubber-coated steel bullets, 18 who suffered the effects of teargas inhalation and three who suffered burns from gas bombs and concussion grenades.

The PRCS said one of its medics was injured while performing his humanitarian duties, trying to help wounding Palestinians in Abu Dis.

The invasions were mainly focused in Rad Kabsa area, between the two towns, in addition neighborhoods in the two communities after the soldiers invaded them.

It is worth mentioning that the protests started after the soldiers invaded al-‘Ezariyya, and installed a roadblock at its main road, before preventing the Palestinians from entering or leaving it.