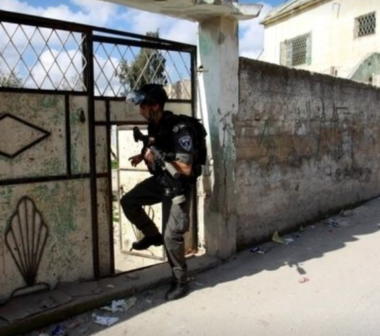 Israeli soldiers abducted, Saturday, two Palestinian siblings in Beit Awwa town, west of the southern West Bank city of Hebron, and installed many roadblocks in surrounding areas. On Friday evening, the soldiers abducted a teenage boy at a military roadblock north of Hebron.

They added that the soldiers abducted Ala’ Yousef Sweity, and his brother Islam, and took them to a nearby military base.

The soldiers also invaded many neighborhoods in Hebron city, and installed roadblocks in Joret Bahlas area, in its northern areas, in addition to the roads leading to Sa’ir and Halhoul towns, before stopping and searching dozens of cars, and interrogated many Palestinians while inspecting their ID cards.

On Friday evening, the soldiers installed a military roadblock in the northern part of Hebron city, and abducted a Palestinian teenage boy, identified as Yousef Thiab Shweiki, in addition to conducting extensive searches on Wadi Sharif area in Sa’ir town, northeast of Hebron.