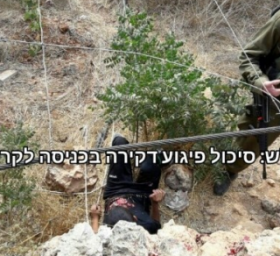 Israeli soldiers shot, on Friday, a Palestinian child near Keryat Arba’ illegal colony, east of Hebron city, in the southern part of the occupied West Bank, after he reportedly attempted to stab an Israeli soldier.

Israeli sources said “the soldiers shot the child, 14 years of age, in his abdomen, causing moderate-to-serious wounds, after he attempted to stab a soldier.”

The sources said no soldiers were hurt in the reported incident, and that the soldiers are looking for another Palestinian, who accompanied the child, and ran away after the shooting.

On Friday at dawn, the soldiers invaded the Deheishe refugee camp, south of the West Bank city of Bethlehem, and kidnapped six young Palestinian men.

The soldiers also invaded Sanour village, south of the northern West Bank city of Jenin, and kidnapped Rida Jamal Habaiba, 25, after breaking into his home and searching it.