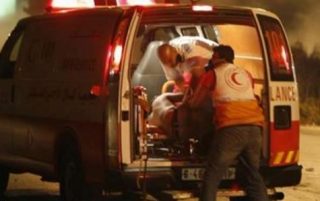 Israeli soldiers shot and injured, Friday, a young Palestinian man with live fire east of the central West Bank city of Ramallah, while a number of soldiers assaulted a physically challenged man at a military roadblock near Jenin, in the northern part of the West Bank.

Medical sources said the soldiers invaded an area close to Yabroud bridge, between Silwad and Yabroud towns, east of Ramallah, and clashed with many locals.

The soldiers fired several live rounds, rubber-coated steel bullets and gas bombs, causing many to suffer the effects of teargas inhalation, and wounding a young man with a live round in is leg.

Eyewitnesses said the soldiers repeatedly struck the young man, identified as Suleiman Zalafa from the Jenin refugee camp, “for approaching the roadblock before being order to.”

Also Friday, the soldiers shot a Palestinian child near Keryat Arba’ illegal colony, east of Hebron city, in the southern part of the occupied West Bank, after he reportedly attempted to stab a soldier.

On Friday at dawn, the soldiers invaded the Deheishe refugee camp, south of the West Bank city of Bethlehem, and kidnapped six young Palestinian men.

The soldiers also invaded Sanour village, south of the northern West Bank city of Jenin, and kidnapped Rida Jamal Habaiba, 25, after breaking into his home and searching it.