Army Injures A Palestinian In Al-Biereh 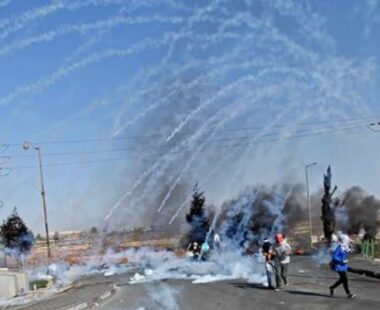 Media sources said the soldiers attacked a nonviolent procession against the annexation of Palestinian lands in the area.

The Palestinian Red Crescent Society (PRCS) said the soldiers chased a young man, before he fell and suffered various cuts and bruises, while several Palestinians suffered the effects of teargas inhalation.

The incident took place near the illegal Psegot colony, which was built on stolen Palestinian lands, and now Israel is trying to annex Jabal at-Taweel Palestinian mountain, to build and expand its colonies.

It is worth mentioning that, about ten days ago, the United States Secretary of State, Mike Pompeo, toured in the illegal Psegot colony to show Trump’s Administration’s support to Israel, its illegal occupation, and colonies, which was built in direct violation of International Law and the Fourth Geneva Convention.

He also met Israeli Prime Minister Benjamin Netanyahu, and the two held a conference, in which the US official labeled the legitimate Boycott, Divestment and Sanctions Movement as a “cancer,” and vowed that the US and Israel will continue to combat it.