Army Injures And Abducts A Palestinian In Al-Khader, South Of Bethlehem 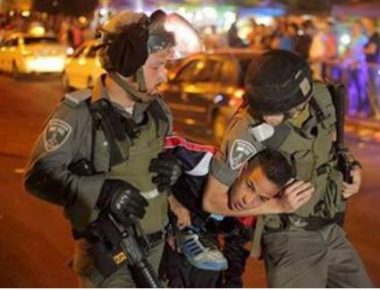 Several Israeli military vehicles invaded, on Tuesday at night, the town of al-Khader, south of the West Bank city of Bethlehem, and clashed with many local youngsters, before shooting a Palestinian, who was driving his motorcycle, and abducted him.

Ahmad Salah, a local activist in al-Khader, said the soldiers clashed with many youngsters, who hurled stones at the invading military jeeps, while the army fired gas bombs, rubber-coated steel bullets and concussion grenades.

He added that the wounded Palestinian, identified as Dia’ Khader Salah, 24, who happened to be driving his motorcycle when the soldiers invaded the town, was shot with a gas bomb in his back, and fell onto the ground, before the soldiers abducted him.

The incident took place close to the Nashash military roadblock, at the southern entrance of al-Khader.

The soldiers also invaded al-Khader’s Old City, and fired gas bombs and concussion grenades at local protesters, causing fire to a tree close to a home owned by Omar Issa.

Local rushed to the property, and extinguished the fire before it spread to the house or other surrounding trees.