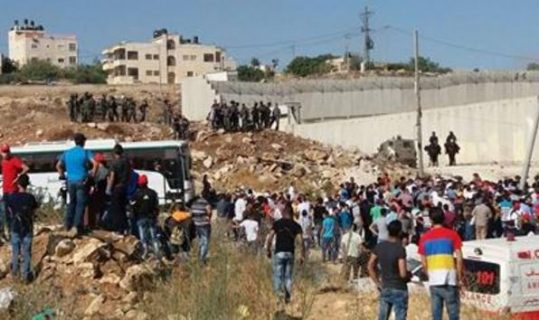 Palestinian medical sources have reported, Friday, that at least ten Palestinians suffered mild injuries, and some suffered the effects of tear gas inhalation, during clashes with Israeli soldiers manning the Qalandia terminal, north of occupied Jerusalem.

The clashes took place following extended delays and searches on the roadblock, in addition to various provocative military acts against many Palestinians trying to cross.

The wounded Palestinians were moved to a number of hospitals in Ramallah, in the central West Bank.

The Palestinians, who were waiting at the roadblock for extended periods, and subjected to provocations by the soldiers, are from different areas of the central and northern parts of the West Bank.

They obtained permits to enter Jerusalem to pray in the Al-Aqsa Mosque, on the last Friday of the holy Muslim month of Ramadan.

On Friday morning, the soldiers kidnapped a young man, identified as Mohammad Samir Abu Zeina, 20, after stopping him on a sudden roadblock near the al-Ram town and the Qalandia refugee camp, while he was on his way to the Al-Aqsa Mosque.